Movie Review: I am Legend

“Every single person that you or I has ever known is dead! Dead! There is no god!”

I wrote the Book Vs. Film for I am Legend over three years ago. Hard to believe it’s been that long but here we are. I recommend going to read that piece as well since you’re here, a transcript which discusses the differences and similarities between novel and screen and which, at the end of the day, serves as the better product. 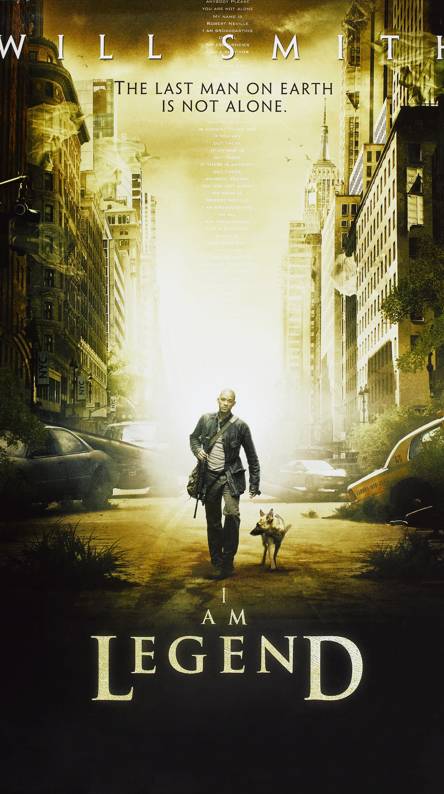 To its credit, I am Legend is much better than I recollect. Will Smith is quite good and there are more than a few scenes demonstrating depth of character and tactful dialogue. These scenes carry a hook with them and you can feel them pierce your heart. It’s painful and it takes some out of you. Will Smith is a talented performer and has been for a long time. He’s really hamming it up here and I admire his commitment to the cause. This film is predicated on one icon front and center and it, for the most part, is wholly reliant on the belief and confidence of that charade. Will Smith isn’t someone who struggles with buy-in, least not in my viewing experience. With the exception of After Earth, there isn’t a film jumping to mind starring him that brings bitterness. He will likely be in an upcoming Winners And Losers episode.

Oh, and Bright. Man, that thing’s putrid. And Hancock.

Robert Neville is a secluded man, one driven to the cliffs of human connection. Survival can be straining not only physically but emotionally and psychologically. I am Legend centers on the latter.

A former military man is prepared for the physical trials. You can see it in his routine. His house is a fortress. Everything is on a timer. He is diligent. It all goes according to plan. It is much more difficult to gain the acumen required for such cerebral hemorrhaging. Lack of interaction can lead to loss of self. Apocalyptic scenery messes with your head. While I’m here mentioning it, there are a handful of shots displaying a true artist’s eye I need to compliment, specifically an aerial in the opening sequences rising above one solo SUV driving through skyscrapers and mass transit, putting this man’s ecosystem into perspective. It’s important we learn about his environment because Neville is no longer who he once was. He is what the doomed landscape has bred him into. We are who and what we surrounded ourselves with at the end of the day. Sometimes, we are unable to change those circumstances. Neville has no one to engage with and cannot run from the apocalypse. He is free to do anything he wants and caged into doing nothing at all at the same time.

While Neville’s loneliness isn’t aiding him, it surrenders his biography to audiences. I am Legend is a conversation with us. No one is ever gonna read Neville’s journals. He knows that himself. His purpose holds on a thin line of thread down to its final strands. During the best scenes of this film, we witness those remaining slivers rip away.

Once everything has been taken from him, the film has a golden opportunity to see what is at the very base of this man and still plenty of screen time with which to do it. At the plateau of the mountain, the film makes an odd decision: to turn around and walk back down the ridge. Quite a bit of potential is available down the other side, new territory to conquer and director Francis Lawrence and writer Akiva Goldsman decide not to. In fact, one could argue the film backs away from Smith to introduce alternative elements, products nowhere near as valuable as Smith. These creations bring up more questions than answers and leave us trending in the wrong direction. Smith and specifically Robert Neville, the man novelist Richard Matheson formed, are the centerfold of the piece. You have been given the reins to steer this character into new territory and your decision is to release the reins and grab a new horse? I just don’t get it. It’s a difference of opinion, of course. I’m sure others disagree but the film’s tonal shift formulates a clear rift in the art’s fabric difficult to overlook. There is a fissure from when this film was a feature and when these moving slides decide to become a blockbuster thriller. I’m getting sick of two halves of films spliced together and being told this how content is made now.

The action sets are not alluring nor overly captivating. That’s not this film’s identity. This is a character drama and as you might have guessed, when you take the persona out of the equation, it loses a lot of its luster.

Will Smith makes this what it is and all the good moments include him. When the film starts to distance itself from him is when it loses its sway. I find this endlessly frustrating every time I watch it because it is very competent for a majority of it before wasting its shots on lesser fare.