“Rollo Tomasi’s the reason I became a cop. I wanted to catch the guys who thought they could get away with it. It was supposed to be about justice. Then somewhere along the way I lost sight of that.”

Commanding cast lists bring a certain air of expectation to their doorstep but not always the product to back it up. That’s how it’s supposed to work though. Great talent should breed exemplary product, so when I read Kevin Spacey, Russell Crowe, Guy Pearce, Kim Basinger, Danny DeVito, James Cromwell, Ron Rifkin and David Strathairn, as well as a long list of Academy Award nominations, I got a little giddy. A win for Best Adapted Screenplay was especially appetizing for me. 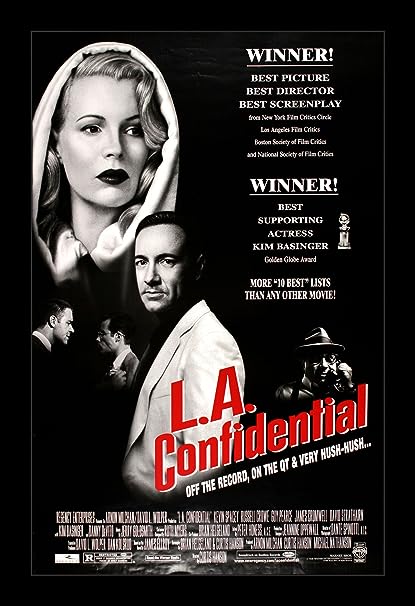 A stacked deck can often be just that though and in my case, I hope for the best but expect the worst in every facet of my day-to-day life. This film, based on nothing but the cover, could be supremely entertaining but we know what they say about covers.

A noir on 1950’s California masterfully done, L.A. Confidential reads like a novel, making that Oscar win well-deserved in my book.

California in those days was propped up as a gold mine of opportunity, a heavenly oasis with everything an American family could ask for: economic prosperity, professional prominence and lavish beaches. It was imperative this paradise be the safest place in the world and the media and police ran with it, but sometimes, in hungry pursuit of things, we forget what we were so driven to reach in the first place and end up somewhere else.

So is the case with many in this story.

Kevin Spacey’s Jack Vincennes is polarizing, charismatic and in love with the screen. He serves as a consultant on a popular crime show and he enjoys it more than he does being a cop.

Guy Pearce’s Ed Exley has the mind of a politician and knows how to play his cards. He reads rooms and coaches the field. He does it all by the book, to the letter. He is a black and white kinda guy.

Russell Crowe’s Bud White is a gray and grayer kinda guy. He’s a “do what it takes” kinda guy. Things get done because of guys like Bud. He’s the muscle but don’t confuse that for stupid. He aspires to be more than the guy who throws punches.

As is the case in many of our journeys, it eventually dawns on us where and what we are and it is in that moment that we make one of the most vital decisions of our lives: staying or going, the flight-or-flight response. These vital seconds speak more to us as people than few other things ever will. It preaches whether we were brave or cowardly, loyal or dishonest, virtuous or sellouts. One of the things I love about this picture is we get to see these frames in nearly all of these characters.

During a crucial exchange, Vincennes will admit he’s forgotten why he wanted to be a cop.

Exley learns it’s not possible to keep your linen clean in this business and has to decide how to proceed.

Director Curtis Hanson and screenwriter Brian Helgeland craft together a beauty of a script, one with jibe and jive and flair. It is a time capsule which creates a bubble of history to explore. I’ve talked about tone a lot during the last few weeks. Watch this and you’ll realize how central tone is to art. Tone creates buy-in and a good detective drama requires that. A 50’s crime tale is far different from one in the 90’s. The lingo, the costume design, the phrasing, how people were. We are often what our environment makes us and it is therefore integral for directors and writers to demonstrate the ecosystem which forged our characters into who they are. I love the outskirts of L.A. Confidential. It is not the stuff directly in front of the lens. In fact, most of it takes place off stage. It requires research into sociology and psychology and an ongoing perusing of dialect and diatribe. Our pasts deserve this level of dissection and detail. It’s how we learn from them.

The borders of this painting are great, the dialogue astounding and the acting marvelous. Russell Crowe and Guy Pearce were Australians not established in the states. These were some of their first tapes. Their careers are a product of such work. Established stars Spacey and Basinger are quite good, the latter winning an Oscar for Best Supporting Actress. DeVito is quick-witted and the film’s self-proclaimed funnyman while James Cromwell is his usual self, cool and collected.

In a year with less competition (Titanic, Good Will Hunting, As Good As It Gets), L.A. Confidential would have run the table. Refined technique, treasured performances and a culture shock like few others, L.A. Confidential is quite a stunner.