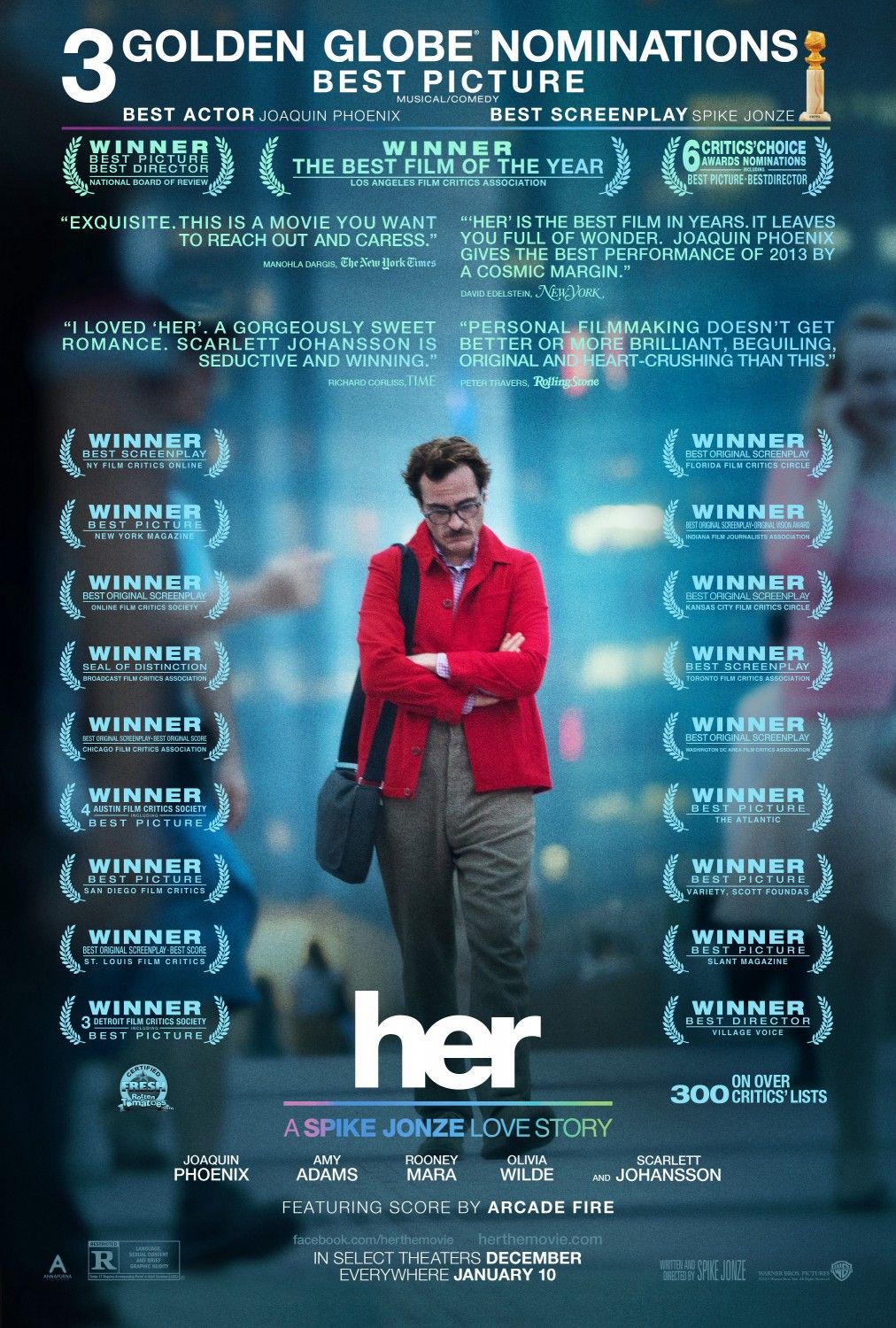 “Sometimes, I think I’ve felt everything I’m ever gonna feel, and from here on out, I’m not gonna feel anything new.”

Her is a truly marvelous work of art, something filled with awe, laughter and the most passionate of emotions.

The 2013 film, directed and written by Spike Jonze, was nominated for five Academy Awards, including a win for Best Original Screenplay, a well-deserved honor. It demonstrates the want to be connected in a world further disconnected each and every day. People don’t interact with each other anymore, it seems. Do they?

I feel I’m a hamster on a wheel. I think a lot of us, if we step back and take a minute, would recognize the sensation. And it feels like a waste, doesn’t it? It appears like we’re missing out on something, like maybe everything we’ve been taught to understand at this point in our lives wasn’t even the important stuff.

Her has a lot to say. When you watch it, it feels natural and unrestricted, a tone hard to convey earnestly in Hollywood. Too many productions showcase their knowledge of company time. They often seem rushed to spit out their lines in a timely fashion, efficient but not effective.

Perhaps that is why Her feels like such a genuine partner, one who makes time slow and everything else seem blurred and impartial. Life is your partner, at least for us romantics; it revolves around him/her and without him/her it’s empty, null and void. He/She’s your everything. You weren’t living before him/her and you won’t be able to after he/she’s gone.

Love pains you in ways you didn’t know you could hurt. It can make you never want to get out of bed, make you want to smash all your mirrors on the staircase. It can cause an unquenchable hunger and an exhaustive desperation worse than any marathon. Attachment rips you down to depths you didn’t know existed but love teaches you to breathe in ways you didn’t realize you could. It grants you vision you didn’t recognize you could possess, ascends you to a sense of wonder, joy, fulfillment. Love is life’s best drug. The pursuit of connection, in a place where it seems impossible to do so, will lead to unorthodox avenues but those streets are what grow us into what we become.

Her, and I suppose more specifically, Spike Jonze, have such a thorough grip on emotion. The penmanship on this cover is delicate yet brutal in its execution. The dialogue is dynamite. Her‘s got that Soul Power.

Joaquin Phoenix’s Theodore is a ship in a bottle, with tides of heart but a narrow channel through which to expel them. He desires love again but he’s paralyzed from a breakup with the love of his life. His being is meaningless.

He writes love notes for a living, scribes for those without the vocabulary or leisure to do so. His occupation is ironic, given his inability to feel at the present time but through those letters he gets to live, or at least he used to. It’s scary what paralysis can do to you, what your heart can do.

The purchase of an operating system provides a new catalyst, a fresh ingredient to his daily recipe that he’s not sure how to best utilize. Of course, the voice of Scarlett Johansson probably has that effect but it’s her capacity to empathize with sentiment that catches him off guard. Computers aren’t supposed to do this. Better yet, how can this computer know me better than anyone else? And why would it want to?

Over the course of the next two hours, Theodore and Samantha take us on an emotional roller coaster that goes unmatched in my memory. This is a gut puncher. It hurts real good, as they say. It hurts because you know how good what you’re experiencing is but somewhere deep inside you, a voice reminds you it’s not real. Relationships like this don’t exist. Mutual understanding, loyalty, honesty, hope..you’ve just been slighted too many times to believe it.

But there’s another voice, one that tells you you should. Fairy tales exist after all. How could you recognize the pure qualities if such a thing didn’t? This voice wants you to dive in and you find yourself wanting to. I think that’s because we all wish to, even the cynical pessimists such as myself.

This is a film made for romantics. If you are one, you’ll fall in love the same way I did. Its writing is near faultless and its palette of emotions is diverse, a classical pianist who knows all the right keys to push. It is a beautiful tune, a dance with highs and lows, a concerto with bravado. Just a splendid work of art.

50-59   This movie isn’t intolerable but it’s not blowing my mind either. I’m trying really hard to get some sort of enjoyment out of this. (Death Race, Wind River, Tommy Boy, Death Note, True Memoirs of an International Assassin)

Her lingers long after viewing, which is the most sincere compliment I can give a great film. You could spend a whole day, perhaps multiple days, thinking about all that’s explored here and what went unexplored but the best thing you can do is apply what you have learned. This film calls for you to discover yourself and you owe it to yourself and those around you to do that.