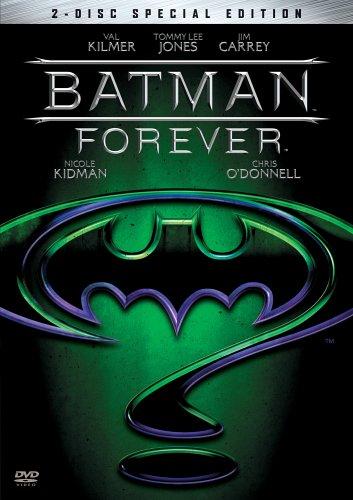 Batman Forever, the Joel Schumacher Batman endeavor that happened before the “please make it stop” Batman & Robin, is far better. I’m so thankful for that. I was thrilled to look at the cast list and see Jim Carrey as the Riddler. A brilliant casting choice.

The 1995 blockbuster plays like a moving comic book sketch. It carries light-footed dialogue and the heart of an admirer with it from scene to scene, bathing in the air created by someone who held a fondness for the characters and storylines created by comic book legends Bob Kane and Bill Finger. It shows in the product’s craftsmanship and in the attention to detail. Said attention earned this film three Academy Award nominations for cinematography, sound and sound editing.

Certainly more colorful than most comic book films, Batman Forever‘s atmosphere is unique in film making but sentimental in stirring memories of the original works. Throughout Schumacher’s invention, one will find the tone, crisp scenery and character makeup associated with direct storytelling.

The whole cast is an upgrade when compared to what came two years later. Val Kilmer serves as a more composed and oriented Batman. Some screenwriting that held some semblance of competence certainly helped. As Kilmer wrestles with elusive but persistent dreams, Carrey stars as the Riddler, an inquisitive scientist with an unhealthy fascination with Bruce Wayne that turns hostile when his latest invention is rejected by the billionaire. I’ve always found the Riddler to be a charming presence in the Batman universe. A man with a dire need for control and an ego fed by a superiority complex, Edward Nygma is a wild card in a universe that at times feels a little too predictable. Batman writhes in growing pains and the enduring trauma of his parents’ death but this regular character conflict never feels taxing. This does leave the villain with a need to develop chemistry with the audience rather quickly and tilt the scales back to a more even playing field.

There’s a suitable blend of humor in the work and all in all, Batman Forever has a couple of quality gibes and laughs.

Regardless, it’s also a work that shows wasted potential. Again.

I feel like I discuss this every day, the phrase “wasted potential.” It’s simply stunning how many films put their feet in the water and nothing more.

Schumacher, in his stout stubbornness, refuses to let his film truly fly. Jim Carrey was the perfect actor for the role of the Riddler. You could argue it was the role he was born to play. When I watch Carrey at times force himself into performing a reshoot of The Mask, I am both entertained and frustrated, entertained because of what he gives to the film and frustrated by what he’s never afforded the opportunity to give.

Schumacher is just as much of a control freak as the Riddler, hypnotized by the glory of his childhood dreams that he never bothers to make Batman Forever his own. He’s precise and clearly has an undefinable work ethic, but once he reaches the goal he has set for himself, he’s done. That’s a shame because Batman Forever‘s goal should have been higher. Schumacher’s insistence on the comic comedy placard both reveals his expertise and firmly places his film in a straitjacket, leaving it utterly constrained by the director’s death grip like a domineering father who tries to live his dreams through his son rather than allow his son to become his own man.

It is in Batman Forever that you see Schumacher’s vision and why, in my eyes, the failings of Batman & Robin should have been expected. If you don’t let something breathe, what happens to it? You don’t have to be a brainiac to figure it out.

Hopelessly constricted, Carrey can only run so far in the Riddler costume before Schumacher throws a wall of cement in front of him and tells him he’s not allowed to go any farther, leading to a finite game of mazerunning that I’m sure left Carrey thoroughly disgusted. Meanwhile, Tommy Lee Jones’ Two-Face is a lunatic who raves and revels during every second of screen time. Harvey Dent is a sticker too easily ripped off and aside from that sticker, nothing connects Tommy Lee Jones’ character with the villain he’s supposed to be. Trigger-happy and reactionary, it’s hard to believe Two-Face was ever Harvey Dent. Rather than a cunning iconoclast, Two-Face is reduced to the stereotypical comic book villain: a crazed fiend of a man who has nothing removed from witty banter to say. To put the crazy label on anything demonstrates a lack of understanding. Crazy is a term used when someone is radically different from you and you can’t be bothered to learn more. True villains are more than the crazy label. They are calculated, collected and merciless. The crazy label doesn’t carry any of these things with it.

Our writers may have been uneducated about how to write a villain but I also wouldn’t doubt Schumacher might have handcuffed them to a table and told them what to write. Bullheaded and clearly reluctant to consider outside advice, Schumacher’s vision rings true: you can make a comic book movie like a comic book. It’s also true you’ll never get anything more than that from Schumacher.

40-49   This movie is just mediocre. It’s not doing anything other than the bare minimal, so morbidly boring that sometimes I’m actually angry I watched this. (Batman & Robin, Bloodsport, War, The Ridiculous 6, The Lost Boys)

30-39   Definitely worse than mediocre, the 30′s ironically define the 1930′s, full of depression, lack of accomplishments, poverty and just so dumb. (The Crow: City of Angels, Centurion, Planet of the Apes, Stonados, Redemption)

My score for Batman Forever: 66.

Both entertaining and frustrating, Batman Forever is a mixed bag of treats. It accomplishes the feat of the perfect “comic book movie exactly like the comic” task. Schumacher, meanwhile, is a horse wearing blinders. His ambition takes him down the racetrack straight away but leaves him ignorant to the talent and repertoire he had around him. He was too busy mushing them forward to notice.